The Cultural Element has gifted a semi-concert piano to the Cultural Centre of Gornji Milanovac! The ceremony, which was attended by many journalists, took place in the modern Gallery of the Cultural Centre. Thanks to a generous donation from the medical family Sekulić, the organisation received a semi-concert piano and wished to gift it to someone who needed it most. In the last month, more than 300 people and institutions from five countries entered the competition for the award. After a thorough examination of all the applications, we decided to award the piano to the Cultural Centre of Gornji Milanovac. At the award ceremony, Tadija Miletić, President of the Cultural Element, and Dragan Arsić, Director of the Cultural Centre, addressed the audience. The award ceremony was completed by a mini-concert by Anđela Jovićević, a fifth grade student from the “Dr Vojislav Vučković” music school in Čačak. 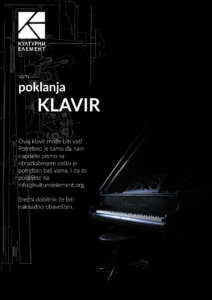