Marking the memory of Night of Broken Glass and the pogrom that took place on the night of November 9, the Cultural Element, in cooperation with the Museum of the City of Belgrade, created something completely different from all previous concerts within the season “Music Vaults of Belgrade”. In the authentic part of the former infamous Nazi camp on Thursday, November 9, in the Museum of Banjica Concentration Camp, the string quartet “Anime” performed Shostakovich’s String Quartet no. 8, while the actor Nikola Štrbac read excerpts from the book “Letters of the Executed”. For a moment, the concert was interrupted by Branko Žujković in the role of a prison guard, calling out the numbers with which everyone in the audience was marked. The concert was held in a moving atmosphere, and we are especially glad that this concert attracted a new audience and people who visited the Museum of Banjica Concentration Camp for the first time. 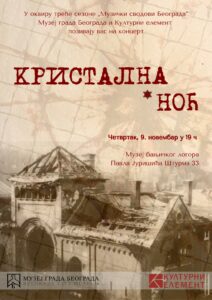