By performing project called “Plaisir d’amour” which took place on October 29, 2016, at the Belgrade City Museum, as a part of October Salon, the Cultural Element and the Belgrade City Museum officially opened the second season of the “Musical Vaults of Belgrade”. By combining music, theatre and movement, and in symbiosis with the idea of this year’s October Salon, the musical performance “Plaisir d’amour” represents the flame of supernatural love. Inspired by the renowned song by composer Jean-Paul-Egid Martinie and Jean-Pierre Claris de Florian’s poetry, team of authors, composer Ivan Plazačić, director Tadija Miletić and choreographer Marina Miletić created a choreo-musical piece reflecting the question that has been asked for centuries: “Is love surrounded by passion condemned to an unintentional ruin?” 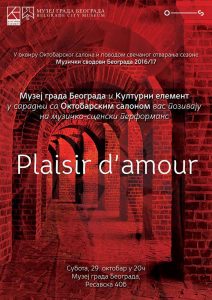