After a very successful and visited first concert in December 2017, another one took place afterwards. On Wednesday, January 24, 2018 at 7 PM, Concert Lecture “Mademoiselle at a piano” was held at the Princess Ljubica’s Residence, as part of the accompanying program of the current exhibition “Anastas Jovanović – Art and New Media”. Pianist Dina Čubrilović and lecturer Dr. Srdjan Teparić, a music theoretician, assistant professor at the Faculty of Music in Belgrade and a critic of Radio Belgrade, revealed the role played by the “Mademoiselle at a piano” and who was the first Serbian “Mademoiselle at a piano”. The program included works by J.Velisavljević, I. Bajic, А. M. Nisis, F. Bero, L. van Beethoven and R. Schumann. The program was realised in cooperation with the Cultural Element and the Belgrade City Museum. The end of the 19th century was a sign of great cultural progress. Successful Serbs sent their children to study abroad, where, among other things, they learned music. Soon in a number of houses, they found pianos and other instruments that echoed the sounds of Beethoven, Schuman, Brahms, Chopin, Schubert and other composers, and especially the place for this piano had young successors. 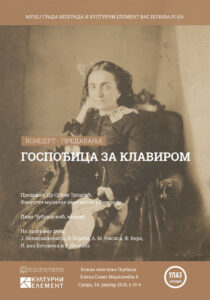