With the concert “Dürer as an inspiration” on September 26, starting at 7 PM, we ceremonially opened the season entitled “Music Vaults of Belgrade”. By combining music with other arts, the idea of this season is that each of the concerts be presented as a kind of artistic form. The music editor of the season is the pianist Dina Čubrilović, and the realisation of the concert itself includes many members of the Cultural Element. At this concert we presented the Belgrade Baroque Ensemble that played compositions from the German speaking area from the early Baroque period. Surrounded by the extraordinary works of Albrecht Dürer, visitors were able to hear the works of Rosenmüller, Schmelzer and Muffat for the first time. 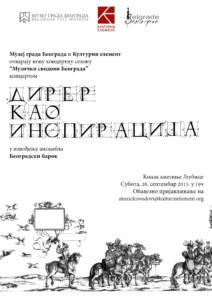