On Saturday, December 23 at 6 PM at the Princess Ljubica’s Residence, Prof. Dr. Srdjan Teparić, and pianist Dina Čubrilović organised a concert-lecture on salon music in the life of Serbian citizens. The program consisted of: J. Velisavljević, I.Bajic, А. M. Nisis, F. Bero, L. van Beethoven and R. Schumann. The program was realised in cooperation between the Museum of the City of Belgrade and the Cultural Element in the frame of the exhibition about Anastas Jovanović. Anastas Jovanović, as an academically educated artist, an outstanding lithographer and talented photographer, eternalised, during the second half of the 19th century, all the personages of his time, visualised and popularised Serbian history, its contemporary protagonists and heroes, devised the first state multimedia festivities and designed postage stamps and medals. With the support of the political elite (primarily the ruling family Obrenović), Jovanović participated using new visual media in the construction and development of the modern image of the Principality of Serbia. On the other hand, Serbian piano music, which was formed according to Western patterns in the areas of the Kingdom of Serbia, has been viewed as part of the comprehensive process of Europeanisation of Serbian culture in the 19th century. Salon music was singled out in that period. This syntagma is about music genre and music practice that disappeared from the historical stage only in the middle of the 20th century. Who were the pioneers of the development of art music and how it evolved in Obrenović’s court, we discovered at the first in a series of lecture-concerts. 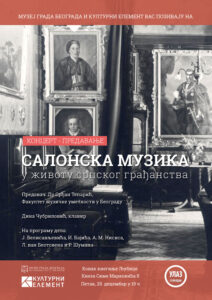