After a great success of the concert-performance about Tchaikovsky under the name Quod Fatum, the Cultural Element performed another concert-performance from the cycle “Portraits of Composers” in cooperation with the Belgrade City Museum and within the season “Music Vaults of Belgrade”. Through letters and music, on the first floor of Princess Ljubica’s Residence the audience was given a chance to see the personality, but also the creativity of one of the most genial composers in history. Gathered together on stage, musicians and actors, Stevan Karanac (tenor), Jovana Čurović (soprano), Katarina Aleksić (violin), Ivan Plazačić (baritone), Dina Čubrilović (piano), as well as the young actresses Emilija Nestorović and Isidora Milinović performed before the Belgrade audience. The project was directed by Tadija Miletić. 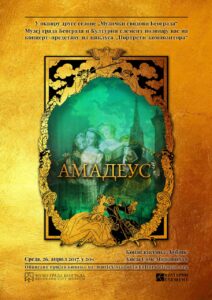