In cooperation with the Belgrade City Museum, and as a part of opening of the third concert season of the organisation Cultural element “Music Vaults of Belgrade” on October 29, 2017, at 8 PM at the Belgrade City Museum in Resavska Street, was held the performance entitled “Red October”. This musical performance, created especially for celebrating the 100th anniversary of the October Revolution, has evoked a special atmosphere that led to the regicide in Russia. The main themes of this performance are the changes that followed 1917 and the significance of the revolution in modern times. We asked a series of questions. How do we see the current revolutions? Are we ready to fight with indifference and do we bear the source of the system or the source of the revolution? On this occasion, three pieces by Jean Sibelius for violin and piano from op. 85, as well as fragments of music inspired by compositions by Nikolai Medtner and Dmitry Shostakovich, were performed. 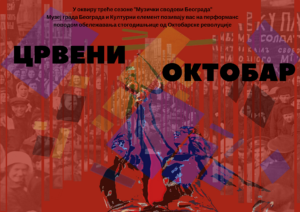