On Saturday, December 14, a music and dance performance “Sculpting Time” was held as part of the exhibition “Smart Art – Art and Science in Application”. From inspiration to interaction. “, which was held in the Residence of Princess Ljubica. The performance is inspired by the symbiosis of science and technology, which, although completely opposite, can produce new revolutions together. The artistic team consisted of: Mila Stijak, Nikola Kalović, Ana Spremić and Dina Miletić, led by the directing ideas of Tadija Miletić. The program is part of the fifth season of Music Vaults of Belgrade, organized by the Cultural Element and the Museum of the City of Belgrade. 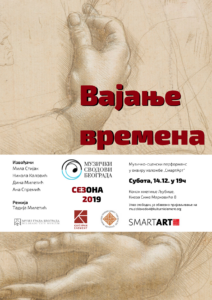